Since August 2019, CFP Board has invested significant resources, both financially and operationally, to strengthen the enforcement of our Code of Ethics and Standards of Conduct (Code and Standards) to benefit the public and to reinforce the confidence and security that comes from working with a CFP® professional. These investments were informed by the recommendations provided by the Independent Task Force on Enforcement.

CFP Board Conducted “Historical Background Checks” on All CFP® Professionals

In 2020, CFP Board completed background checks on all 89,000+ CFP® professionals to detect potential misconduct that previously may not been investigated by CFP Board. In the background checks, CFP Board sought to detect information that may suggest a violation of the Code and Standards, including:

While completing the Historical Background Checks on all CFP® professionals, CFP Board implemented a background check process that allows it to review relevant public sources of information including BrokerCheck, the Investment Adviser Public Disclosure (IAPD) database, and other public records on an ongoing basis.

CFP Board’s Historical Background Checks identified potentially relevant historical information involving 17,000+ CFP® professionals. This information was then reviewed against case opening criteria developed by CFP Board staff in consultation with the Board of Directors. These criteria take into consideration various factors, including:

CFP Board also excluded matters that it already has investigated. CFP Board has taken more than 1,000 public enforcement actions against CFP® professionals in its 30-year-plus history and conducted many thousands of investigations, with each public disciplinary action announced in a press release. Therefore, CFP Board had already investigated much of the historical information.

A significant number of events that CFP Board detected during the background check and initial criteria review fell outside the 7-year period, were settled for under the threshold amount excluded by the severity thresholds, or previously were investigated.

CFP Board also sent cautionary letters to those CFP® professionals with potential misconduct that occurred between seven and ten years ago, without investigating those matters. Cautionary letters serve several functions, including putting the recipient on notice that if they come under investigation again, the existence of the letter can be considered an aggravating factor during the adjudication of a subsequent charge of misconduct that would be relevant in determining an appropriate sanction.

The background check and further evaluation process resulted in the opening of “Historical Investigations” involving 1,266 CFP® professionals, or approximately 1.4% of the total CFP® professional population.

CFP Board dedicated substantial staff and other resources to form teams to investigate these CFP® professionals. Most CFP Board investigations do not result in public sanctions. In investigations where there were probable cause to believe there are grounds for sanction, CFP Board presented a Complaint containing the alleged violations to the Disciplinary and Ethics Commission (“Commission”).

The Commission is responsible for deciding whether misconduct has occurred, and if so, what sanction is appropriate. It comprises experienced CFP® professionals and public members who provide a peer-review process for reviewing alleged violations. As part of that process, a CFP® professional can:

In cases where CFP Board proves grounds of misconduct, the Commission may impose a sanction including a private censure, a public censure, a suspension, or a revocation of the right to use the CFP® marks.

The Commission normally meets six times a year to review any matter in which CFP Board has alleged that a CFP® professional has violated the Code and Standards, or its predecessor, the Standards of Professional Conduct. However, to accommodate the increased activity resulting from of the Historical Investigations project, the Commission temporarily doubled its normal meeting schedule, with meetings occurring monthly throughout 2021 and into the first half of 2022. This allowed CFP Board to issue public sanctions against more than 130 individuals in 2021.

CFP Board is nearing completion of the 1,266 investigations. Many of the more than 200+ public sanctions that CFP Board issued in 2020 and 2021 resulted from the Historical Investigations.

As the Historical Investigations near completion, CFP Board’s Detection function will undergo an independent audit. The audit will examine whether CFP Board is consistently detecting and investigating misconduct in accordance with CFP Board’s case opening criteria. 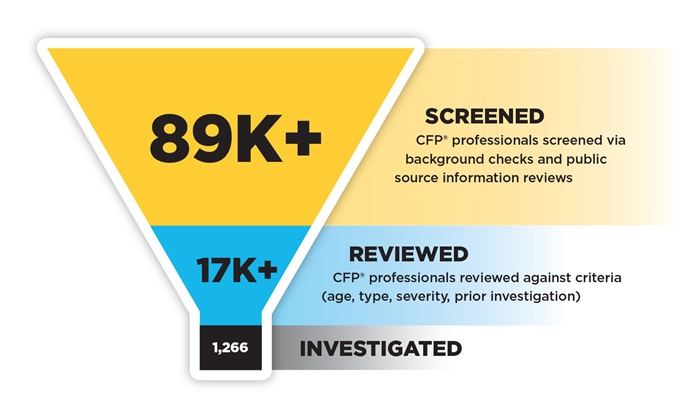